Imagine this. Your friends, family and just about everyone you know are off on holiday at some point this year. You’ve had several offers but, no matter how hard you try, you can’t bring yourself to book a getaway for you and your loved one. They’ve been working for months straight, but that is seemingly irrelevant here. Your fear of flying is holding you back, threatening your social life and, more importantly, putting strain on your relationship. You only have to hear the word airport and your bottom lip starts to tremble.

Unfortunately, the above is a reality for over one in 20 Brits who have a chronic fear of flying, according to leading psychologist Dominic Knight. These 5% of travellers lose sleep before flying and even cancel their flight last minute.

Yet, why does this fear exist? For years now, the art of aviation has become more and more common. Flights to Spain are typically less expensive than getting the train from London to Newcastle, so you can see why people choose to travel abroad when the cheap costs speak for themselves.

There’s also the small matter that flying now is safer than it has ever been before. According to the Aviation Safety Network, in 2017 no commercial jet aircraft were involved in fatal incidents, making it the safest year for flying on record. 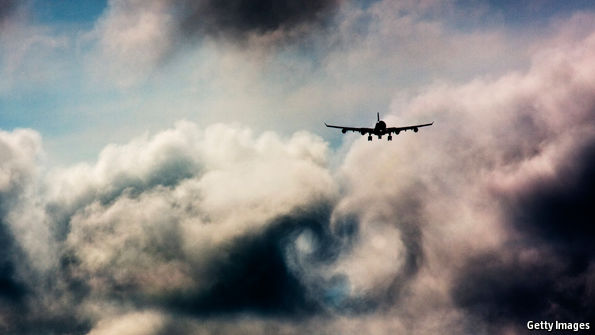 For the previous decade, the number of deaths caused by aviation accidents has fluctuated between 50 and 1,015 per annum. With in excess of 37 million flights a year being made, that makes the total chance of your flight being involved in a fatal accident 0.01 per cent. But, that doesn’t stop people from having a chronic fear of flying.

“I take anxiety tablets an hour before the flight,” said a former F1 employee, who doesn’t want to be named.. “I know that it’s not advised, but I also have a few glasses of red wine before and during the flight to calm the nerves.”

For him, travelling was a big part of his life. With at least 20 races on the Formula One calendar, he would have to sit through a minimum of 40 flights in one season. Unfortunately, the flying was just one sacrifice he had to make in order to do his dream job.

“Before a long haul flight I feel physically sick,” he said. “The fact that I can’t sleep on a plane, despite trying everything available, probably contributes to that. I have to find things to occupy my mind so I don’t panic, although I’m in a constant state of panic as soon as I step on the aeroplane!”

While he experiences the sensation of panic, there are other feelings that a person with a phobia can have leading up to a flight. “Most of the time, the fear does make people panic,” Dominic Knight, a leading fear of flying psychologist, said. “Others can feel embarrassment because they know they are not behaving in a way that they normally do. Others feel petrified as they fear what they believe to be impending disaster.”

Kate West, a university graduate from Bristol said that she was ‘‘physically sick’” the night before a  flight “due to nerves”.

Perhaps the biggest thing to remember is that the fear doesn’t stop at the one individual. It can affect a whole family, for instance, children who see their parents crippled with fear each time they go on holiday.

“If one person in the family is affected, it affects everyone,” Dominic said. “A fear tends to spread. When a person is anxious in one area, the brain tends to associate the fear in other areas too. A father who can’t fly leaves his wife and children to go on their own. If a child can’t fly the entire family is disrupted.”

While sometimes a fear can stem from seeing a parent’s or loved one’s reaction, some come from more generic experiences. While aeroplanes can stir awe and wonder in some, others experience the exact opposite.

“My fear isn’t just for flying – it’s for planes,” Kate said. “My earliest plane related memory takes place at the Fleet Air Arm Museum in Yeovilton. I was on a school trip there. They’ve got this airplane carrier boat and there’s a projection against one of the walls of a plane coming in to land on the artificial boat that you’re stood on the deck of. As the plane came in to land I turned and ran, screaming. My teacher grabbed me and calmed me down. I can’t have been much older than five or six.”

There are, however, at least two people on the plane who don’t experience any qualms about flying: the pilots (and, of course, the cabin crew).

Edward Brooksbank has been an airline captain since 1990. He started out flying for British Midland, but now works for one of the world’s largest airlines and is based in Dubai.

“Flying is what I love doing,” the captain of 28 years said. “It makes you feel free, and is a great job to have. Not many people can say that they get to spend most of their days above the clouds.”

Regardless, the pilots do feel sympathy for those onboard who are nervous about what they are about to encounter.

“While it’s routine for us, it may not be for them,” Edward said. “Sometimes the cabin crew tell you if someone is particularly scared and that does add a bit of pressure. You want to show them that they have nothing to fear. Flying is what I do for a living and I do want to show people that it’s a beautiful thing.”

When a fear becomes so chronic that they avoid flying, some follow their initiative and get help. Many airlines offer Fear of Flying courses where an intensive two day period of exposure can set you back hundreds of pounds. Nonetheless, Easyjet’s statistics show a 90% success rate. Others turn to alcohol and medication to help them through. However, the most common way of defeating the phobia is to turn to psychology.

“It’s not about building confidence to fly, because you are not in any danger. It’s about helping a person to stop doing the things that create the problem in the first place,” Dominic said. “Look at it this way, if someone is overweight you can pump them with as many diet pills as you want and even make them exercise, but if they are eating pizzas and McDonalds every day, they won’t lose the weight. In much the same way, if you can get a person to stop imaging future scenarios of doom and gloom, they will be able to fly.”

His methods of treatment focus on finding the trigger for the fear, and then working to expel that.

“My tool box contains elements of Neuro Linguistic Programming,” he said. “I also use hypnotherapy which people may not realise they had been using self hypnosis themselves by imagining the worst case scenarios to the point that they believe it. This restricts their behaviour and options, and creates a reinforcement loop as the brain then perceives a real threat.”

But how effective is this, you may be wondering? Very, as it turns out. Resetting the brain is often used to treat many phobias and forms of anxiety. Dominic has treated many patients in his time working at his practice on the world renowned Harley Street, London. However, he does have one favourite story to tell.

“A client of mine who hadn’t flown in a decade came to me asking to fly to Australia,” he said. “A session that barely lasted two hours resolved the problem. It was touching to receive an email saying, not only had she flown to Australia, but she knocked on her family’s front door to surprise them. The whole family were in tears.”

But for those who haven’t sought professional help, they still find coping mechanisms to conquer the necessary.

“Before I take off I pray,” the former F1 employee said. “I’m not religious in any way but I pray for safety. Even though extremely skilled pilots are controlling the plane, I feel as though my fate is out of any human control.

“Looking out of the window helps me relax though so I will just stare outside and will often begin to feel more at ease. I also always squeeze mini stress balls and, quite simply, chat to cabin crew.”

While people rely on different methods to help them to fly, one thing remains certain: “We’ll always do our job to the best of our ability,” Mr Brooksbank said. “Getting people safely from A to B will always be the main priority and nothing will ever change that.”

This site uses Akismet to reduce spam. Learn how your comment data is processed.

View all posts by Helena Hicks